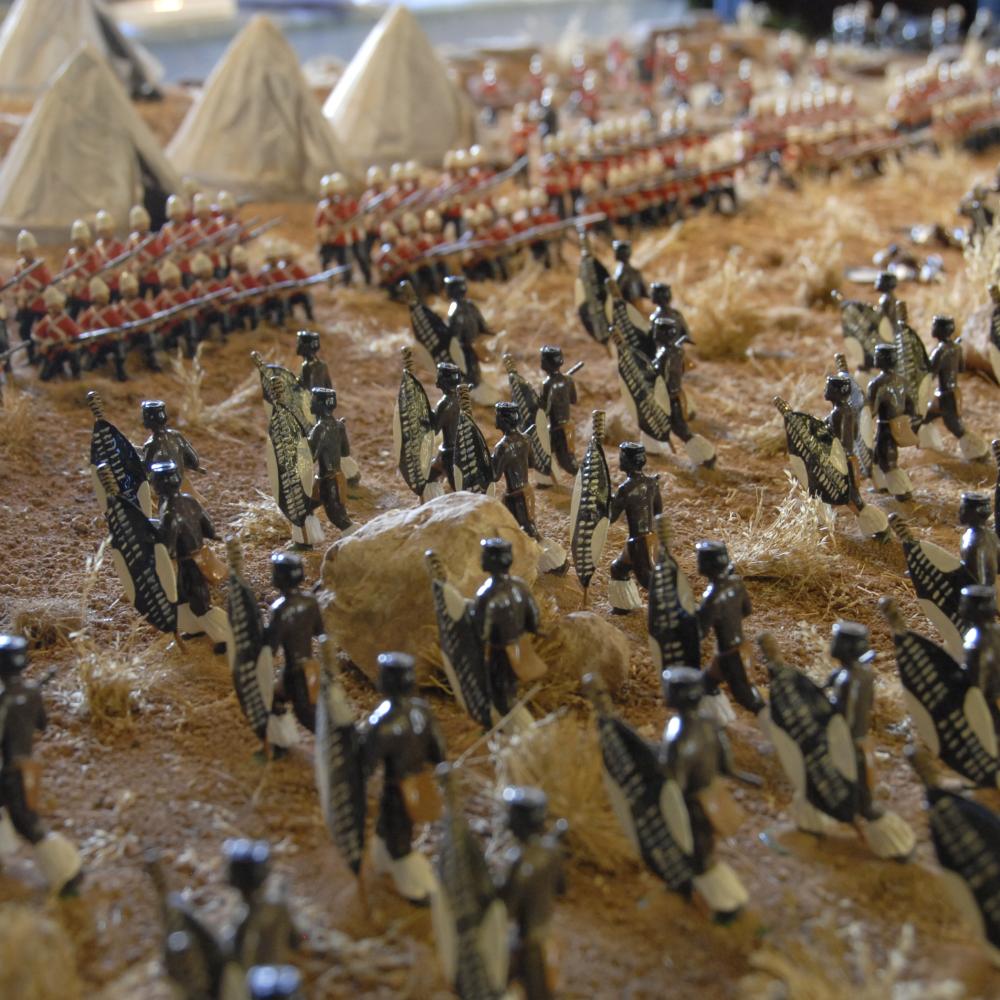 British and Zulu, the fight for South Africa

We find ourselves before the model that showcases the massacre that the British troops suffered at the hands of the Zulu warriors, a model unlike the others as it is stand alone in a small space a visitor encounters coming out of the elevator. It is inspired by one of the battles in the Anglo Zulu war.

The model was first showcased at L’Iber in the temporary exhibition hall in 2012, and later in Ateneo market of Valencia.

“Why do white men want to start for nothing? Why does the governor of Natal tell me about my laws? Do I go to Natal and dictate his to him?”. This was how the the Zulu King Cetshwayo responded to the demands of the British authorities in South Africa to disband his fearsome army. The British’s justification was that Cetshwayo had committed acts of cruelty against his own town and against the Europeans, but the real reason for their hostility was another: in their progressive occupation of all southern Africa, they could not tolerate the threat posed by a warlike people like the Zulu, who for sixty years had constituted a veritable empire.

The pressures continued, and at the end of 1878 the British High Commissioner in the area, Sir Henry B. Frere presented the Zulus with an ultimatum. On January 6, 1879, without waiting for it to expire, General Chelmsford invaded Zululand at the head of 17,000 men, most of them veterans of the metropolis, in addition to an important contingent of auxiliary troops from Natal, Africans and Europeans.

Divided into four columns, commanded respectively by Colonels Wood, Pearson, Glyn and Durnford, were to converge on the Zulu capital, Ulundi, in what everyone thought would be a military promenade; the first clash with the Zulus, at Nyezane, seemed to herald it. With their 7- and 9-pounder cannons, rockets, Gatling guns and the efficient Martini-Henry rifle, fitted with a fearsome bayonet, in addition to cavalry and the usual sabers, swords and lances, the superiority of the British arms was overwhelming.

The Zulus were armed with their traditional weapons: the iklwa, a “spear” with a short shaft and a long blade, practically a sword, as well as large shields, maces, axes and javelins. They also had quite a few rifles, albeit old models, with spark or piston locks. The strength of the Zulu lay in their ability to mobilize a large mass of warriors, up to 50,000, and in the offensive tactic devised by King Chaka, founder of the Zulu empire at the beginning of the 19th century. The offensive called “beef horns” included: the center, the “chest”, attacked, the “horns” surrounding the enemy on the flanks until defeating him in a close hand-to-hand fight.

On January 20th, Glyn’s column, including Chelmsford, reached a point in Zululand called Isandlwana. It was not a difficult position to defend, but Chelmsford, after a cursory reconnaissance of the terrain, decided not to fortify it with ditches or parapets, contrary to colonial army regulations. It was the first of the errors that the commander committed, trusting that they would only spend a day there, and in his informants that claimed there were only small Zulu groups in the area. A little after, Chelmsford committed his second error: hearing that a scouting party had encountered “the enemy,” he believed he was being attacked by the main Zulu army and left the camp with some 2,500 men to bring them reinforcements.

Meanwhile, without the British knowing it, the Zulu army, at the order of the very capable Ntshingwayo and his second hand, Mavumengwana, were nearing Isandlwana. There 1,170 troops had stayed, including 421 Africans, a figure that increased to 1,700 after the arrival of the Durnford African reserve; all under the command of Lieutenant Colonel Henry Pulleine. Shortly after leaving Chelmsford, the British heard a rumble “like a train” and immediately stared in horror at the plain before them occupied by Zulu regiments, altogether some 20,000 men.

The assault was immediate. Shouting “Kill the white men!” the Zulu warriors rushed in successive waves against the enemy camp. British commanders were convinced that with heavy and accurate volleys of rifle fire, artillery and rocket fire, the garrison could repel any African assault. But the British had organized too thin a defensive line and, in addition, they soon had problems with the defective supply of ammunition.

The British could only hold out for a few hours. By evening there was not a single defender left in Isandlwana: whoever had not been able to flee was dead. Returning to the scene at the end of the day, Chelmsoford’s troops were met with a bleak sight: “There were dead everywhere. They were all mutilated.”